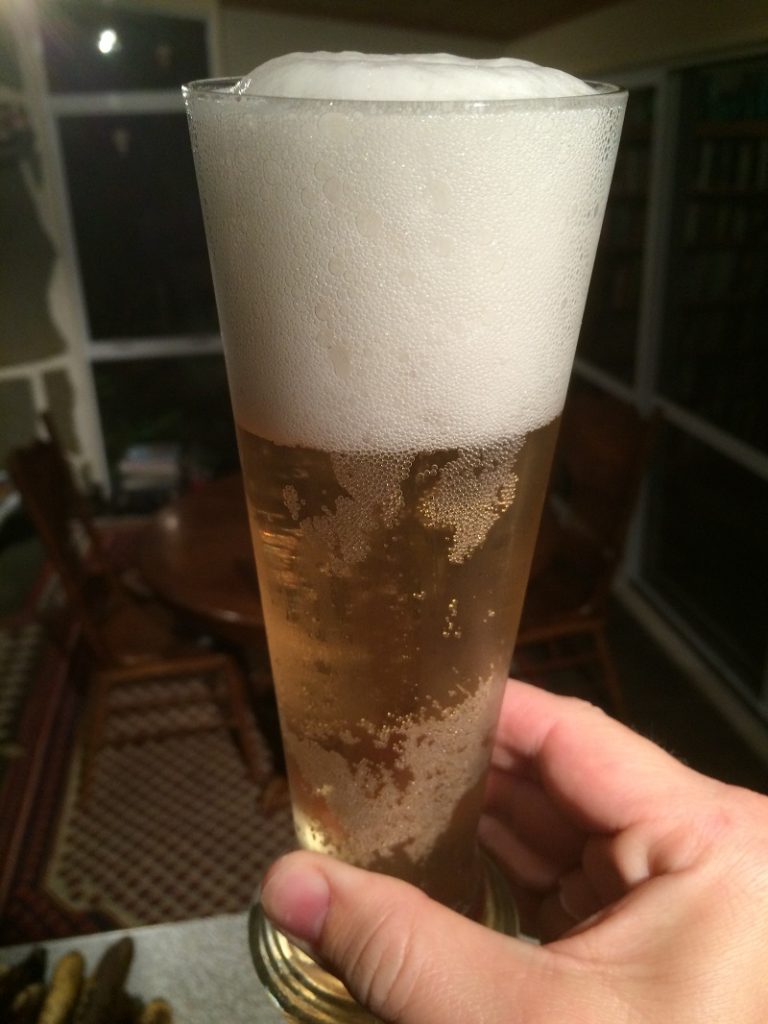 For my eighth brew for “Project NHC” I decided to take a stab at a historical style which I had never tried before; The Piwo Grodziskie (AKA Grätzer), or Polish Oak Smoked Wheat Beer.

This beer style is a bit of an odd duck. Dubbed “Polish Champagne”, it’s a low gravity beer (2.5% – 3.3% ABV) that historically uses 100% oak smoked wheat malt, and Polish Lublin hops. I decided to take a crack at this because it’s one of the few beer styles in the world I have never tried, and because I’m a quarter Polish and thought it might be fun to try something my ancestors might have enjoyed.

Oak smoked wheat malt is much softer and less intense than something like beechwood smoked malt, and is key to this beer’s flavour profile. Fortunately distributors like Cryer Malt are now bringing in oak smoked wheat malt (produced by Weyermann). While Lublin hops can be found in New Zealand, I went with Saaz purely because my preferred online homebrew shop did not carry Lublin, and Saaz is a common substitute.

Because a 100% wheat beer will very likely lead to a stuck mash, and because I wanted to do a protein rest to help produce a clearer beer (an important style attribute) I brewed this as a small batch BIAB. However, instead of using a bag I just added water and grain to a pot and then ran it into a bag-lined colander to collect wort. This made it easy to slowly ramp up the temperature and create a make-shift step mash.

From the BJCP 2015 guidelines: “A low-gravity, highly-carbonated, light-bodied ale combining an oak-smoked flavor with a clean hop bitterness. Highly sessionable.”

Fermented at 18.5°C but after 48 hours I started raising temperature by half a degree each day until I hit 22°C.

This beer changed a lot as it matured. Transforming from something rather weird and unpleasant, into what I personally think is medal-worthy example of the style.

Sept 4: FG is 1.008. Still very cloudy. Aroma is wheaty, smoky, yeasty. Slight smell I don’t love that is almost phenolicy but hard to place. I’m thinking it’s just smoke and yeast. But the flavour is nice. Moderate light smoke. Light, refreshing and potentially clean. If aroma cleans up, should be really nice. Put in secondary. Weird aroma could be saaz hops too.

Sept 7: Added second round of clarifying agent. Clearer, but still some haze.

Sept 18: bottled. FG 1.008. Crystal clear, pale. Aroma of smoked Sausage. Flavor is sort of bizarre. The smoke is subtle compared to rauchbier and the hop flavour peaks through in a way that is strange but not terrible. While not unpleasant, it tastes a bit like hot dog water, beer, and a dash of cat pee. I’m not sure what to make of this given that I have never had a commercial example.

October 20: Wow! This beer has completely transformed. Everything has mellowed and fallen into place. Crystal clear with a pillowy white head, the beer has a mellow smokiness, reminiscent of a Polish sausage. The cat pee aroma from the hops is gone, but a clean bitterness remains. Very mellow and full of flavour for such a low ABV beer. Extremely sessionable. My only question is whether or not there is enough hop presence for style. There is a hop bitterness present, but not much aroma or flavour. My concern would be that the judges will not be familiar with the style either and will take the emphasis on bitterness to mean that the beer should be overly hoppy and bitter, whereas I interpret it to mean that the beer should simply be balanced with a crips bitterness rather than sweetness. This beer does that.

I really like this beer and plan to brew a full batch at some point in the future.

I have high hopes for this beer.