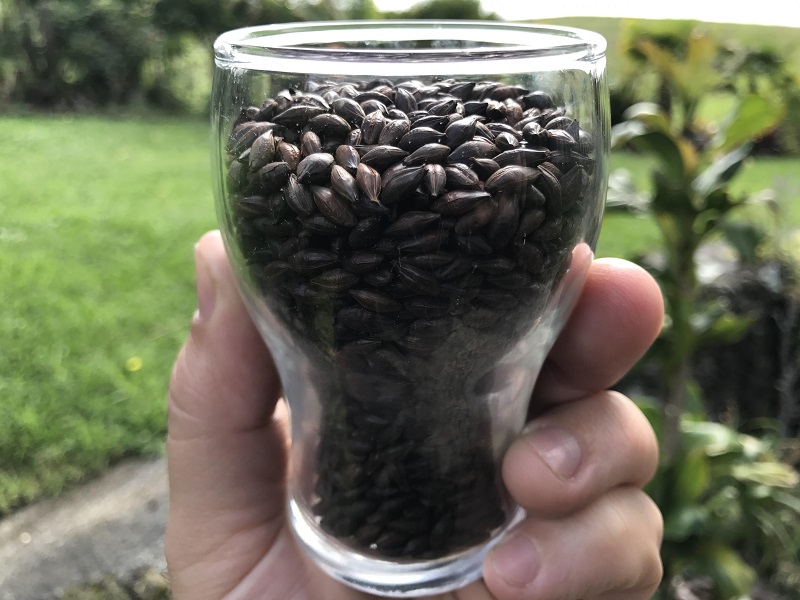 Stouts are without question one of the most divisive beers in the pantheon of beer styles. The complete antithesis of the mass produced lagers that many beer drinkers are so fond of, a Stout is a dark, roasty ale layered in bitter-sweet chocolate and espresso-like flavours. But while many beer drinkers are quick to dismiss the style with the often-heard proclamation: “I don’t like dark beer”, just as many people cherish Stouts with near nationalistic pride.

Originally the word “Stout” was used to simply connote that a beer was strong; not necessarily dark. However, following the popularity of the similarly dark and roasty Porter beer style in the 1700s, a stronger variation known as “Stout Porter” soon rose in popularity. It was not long before the two styles auspiciously diverged and the word Porter was dropped from the name altogether, leaving the world with a dark, roasty beer, forever known as Stout.

While there is still a bit of a debate amongst beer historians and aficionados as to whether or not Porter and Stout should actually be classified as two different styles of beer, typically a Porter tends to be smoother and less roasty, by comparison to the more espresso-like stout.  However, as we’ll soon discover, there are a surprising number of historical and well established variations on the style. 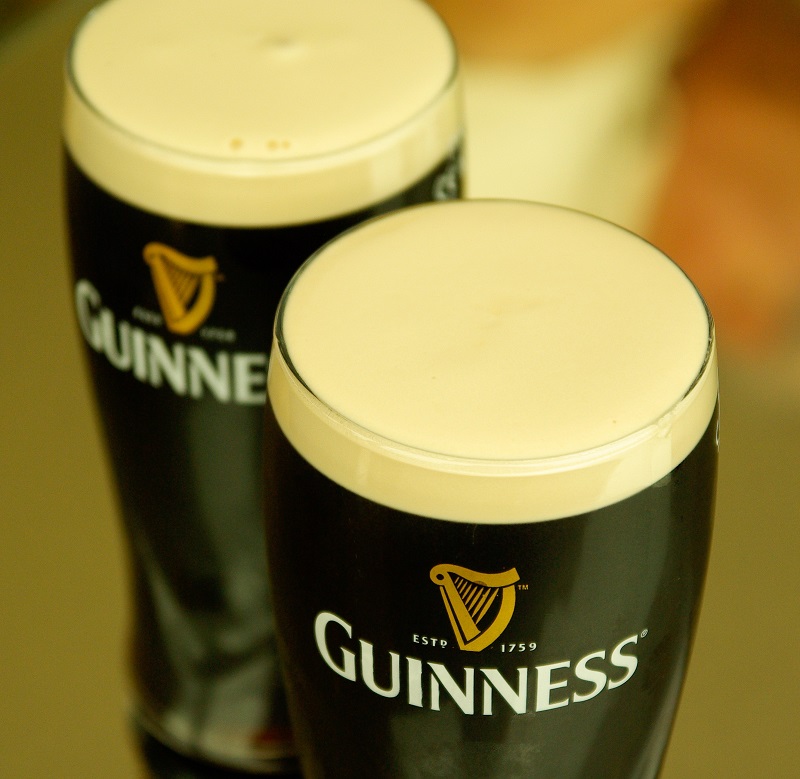 One cannot talk about Stouts without mentioning Guinness. And Guinness is far-and-away, the quintessential example of an Irish Stout (aka “Dry Stout”).  It should be noted that Guinness is also the bestselling Stout in the world. Despite the full bodied, meal-in-a-glass, impression that many have of beers like Guinness, most Irish Stouts are actually both low in calories and carbohydrates; with Guinness Draught clocking in at just 128 calories and 10.6 grams of carbs per serving. Corona, by example, contains 15% more calories and 32% more carbs.

An Irish Stout, like nearly all stouts, is a black ale with a pronounced roasted flavour, often similar to coffee. However, whereas many stouts tend to be big, heavy beers, with a touch of residual sweetness, an Irish stout finishes dry and typically clocks in at under 4.5% ABV. The creamy mouth feel that many associate with the style is usually a result of the nitrogen commonly used when the product is packaged in cans or served on draught, and for a relatively bitter and dry beer (with such a high percentage of astringent, roasted malt), an Irish Stout goes down remarkably smooth. While traditional versions of the style are fairly low in alcohol, a stronger, bolder “Irish Extra Stout” is also produced, and is typically bottled rather than offered on draught.

8 Wired’s Flat White Coffee Milk Stout is a fantastic example of a Sweet Stout, especially if you’re lucky enough to find it on a Nitro tap.

“Sweet Stout” – often referred to as “Milk Stout” due to the addition of unfermentable Lactose sugar (a sugar derived from milk) – is a sweeter, less “burnt” version of the style developed in England in the early 1900s. While traditional versions of the style tend to be lower in alcohol (some examples clock in as low as 2% ABV) contemporary versions can be higher in alcohol and are more varied in balance and their level of roast.

Originally Milk Stouts were claimed to be nutritious, and as such were commonly given to nursing mothers and invalids. However, following World War Two when rationing was in place, British brewers were required to remove the word “milk” from their labels and advertising. Not long after, the style had drifted towards the brink of extinction until being revived in recent years by modern craft brewers. It is not uncommon for modern brewers to take advantage of the sweet base of this beer by flavouring it with chocolate, coffee, and even peanut butter to create dessert-like versions of the style.

An “Oatmeal stout” sits somewhere between an Irish Stout and a Sweet Stout. It tends to be roastier than a sweet stout but not as dry or bitter as an Irish Stout. The style was originally a variation on the “nourishing” Sweet Stouts that were popular in England. The oats give the beer a creamy, velvety, mouth feel that combines with the roasted malts to give, what has been called, an impression of coffee with cream. The style peaked in popularity between the two world wars, but then it all but disappeared until (much like the Sweet Stout), it was revived by many modern craft brewers.

Coopers Best Extra Stout is listed as one of the best examples of an Export Stout, by the BJCP.

Export Stout (also known as Foreign Extra Stout) is a stronger, more-bitter class of stout that – despite often being brewed for domestic markets – earned its name due to the fact that it was commonly brewed for export to foreign markets. The typical Export Stout sits somewhere between an Irish Extra Stout and an Imperial Stout and is perhaps most exemplified in the Southern Hemisphere by Coopers Best Extra Stout. It’s a very dark, strong, somewhat dry stout with prominent roasted flavours, and, at least according to Guinness, was brewed with “extra hops to give it a distinctive taste and a longer shelf life in hot weather”.

Somewhat counterintuitive to the impression that most people have of strong, dark beers, Export Stouts found lasting popularity in many warm, tropical climates (such as Africa and the Caribbean). Eventually these beers were imitated by indigenous brewers who often used local sugars to boost the gravity, lowered the hopping rate, and in many cases, fermented the beers with lager yeasts at a-typical warm temperatures. This created a sweeter, less-bitter, sub category of the Export Stout style commonly referred to as a “Tropical Stout”.  To this day, more Guinness is sold in Africa than is sold in Ireland, due to the enduring popularity of Guinness’s Foreign Extra Stout.

Next on our list is the “American Stout”.  An American Stout is a bigger, bolder, and especially hoppier, version of a traditional English or Irish Stout. Originally referred to in homebrew circles as a “West Coast Stout” (a common naming scheme for hoppy beers), American homebrewers seemed discontent to leave well enough alone and began pushing the boundaries of the style.  Soon craft brewers followed suit and today our bottle shops are filled with examples of this modern take on a classic style.

Ranging between 5% – 7% ABV, American Stouts are medium to full-bodied, very dark ales, which are typically loaded with a high degree of roasted malt flavours; often tasting of coffee and bittersweet chocolate and supported by rich caramel flavours. These beers are commonly rather bitter, with a varied amount of hop flavour, (generally citrusy or resiny, as is typical of American hops). An American Stout is an unrestrained, full flavoured Stout, that can still be enjoyed by the pint as compared to the stronger, and somewhat infamous, Russian Imperial Stout.

The Russian Imperial Stout (often simply referred to as Imperial Stout) is perhaps the most intense of all beer styles. Commonly over 10% ABV this monster of a beer is pitch black, and loaded with complex notes of roasted coffee, chocolate, caramel, toast, raisins, plums, and more. The large quantity of malt used to make such a highly alcoholic beer often leaves a significant amount of residual malt sweetness. An aggressive hopping rate is then used to balance the beer, without which, it has a tendency to become cloyingly sweet.

The origin of the beer dates back to the 1700s when English Brewers would commonly brew a very strong Porter for export to foreign markets. These Strong Porters were said to be Popular with the Russian Imperial Court, a fact that would lead to the beer’s curious moniker. However, the Napoleonic Wars would eventually interrupt trade, and as such, production and sales became more and more relegated to England. Eventually the style all but died out, until (as we have seen time and time again) the style was re-embraced in the modern craft beer era and found new popularity, first in England, then America, and soon the world over. 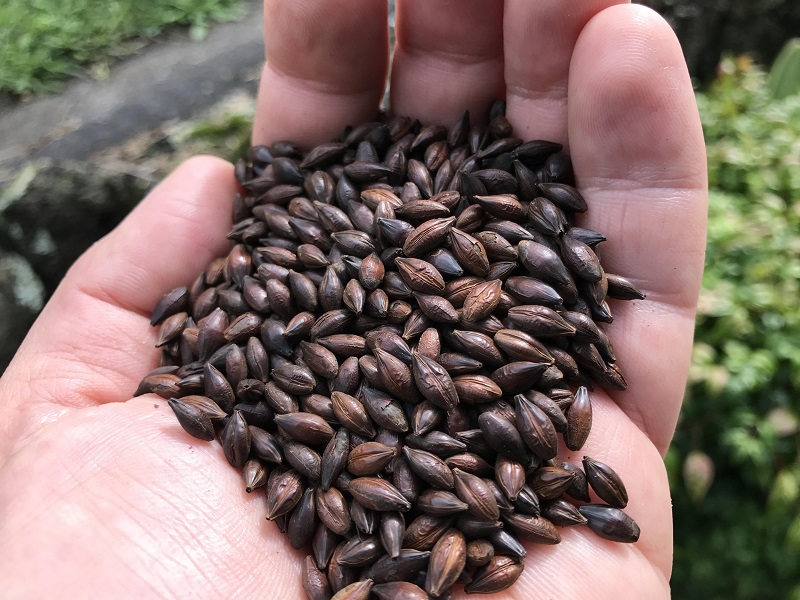 Chocolate Malt is just one of many types of roasted/kilned grain used to make many different types of Stouts.

So for a style of beer that is so often lumped into the underwhelming category of “dark beer” there is a surprising amount of history, evolution, and variation to the style. A Russian Imperial Stout is no more a Guinness than a Double IPA is a Pilsner. Whether you favour dry, smooth, sweet, bitter, hoppy, roasty, easy-drinking, or a slow-sipper that will warm you to the bone, there is unquestionably a Stout for every palate.   For a style of beer that is so rich with history, and has been pushed to the brink of extinction only to rebound time and again, it’s a shame to see it so often dismissed and unexplored based on colour alone. Rest assured, dear reader, that there is much more to these dark, and most flavourful of beers, than meets the eye.

Next post Sour Beer – A Style That Stands Alone

Previous post Saison: A Walk on The Wild Side