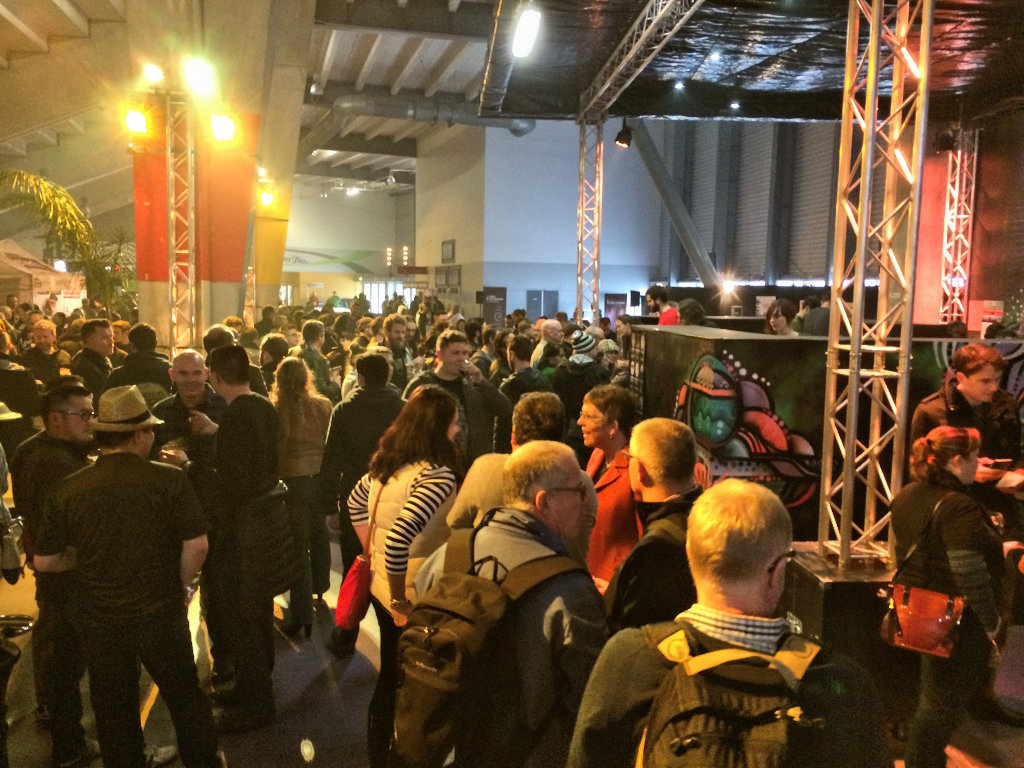 It’s been nearly a month now since just under ten thousand New Zealanders gathered at Wellington’s West Pac Stadium to celebrate what is arguably the world’s most beloved beverage. I refer, of course, to beer.

Beervana is far and away, the North Island’s largest beer festival and should be added to every beer lover’s bucket list, both here at home and abroad.  Unlike other festivals that have a tendency to come off a little more like music festivals with good beer, Beervana is really much more beer-centric. This year alone, the two-day festival featured over 200 brews from New Zealand and overseas; many of which were exclusive to the festival.

As craft-beer nations go, New Zealand is still very young.  However, the local industry is growing faster than one can even report on it.  Each month, we see new breweries taking up shelf space in even the most rural areas, and the creativity of the average New Zealand brewer seems to be boundless.

Nowhere was this more apparent than at Beervana, where enlightened experimentation is rampant and craft brewers from across New Zealand (and beyond) seem to be pushing the very definition of “beer” to extremes.

While there was no shortage of variety at last month’s festival, there were a few trends that seemed to dominate this year’s offerings even beyond the usual IPAs, soft bellies, and facial hair that seem to go hand-in-hand with any self-respecting beer gathering. 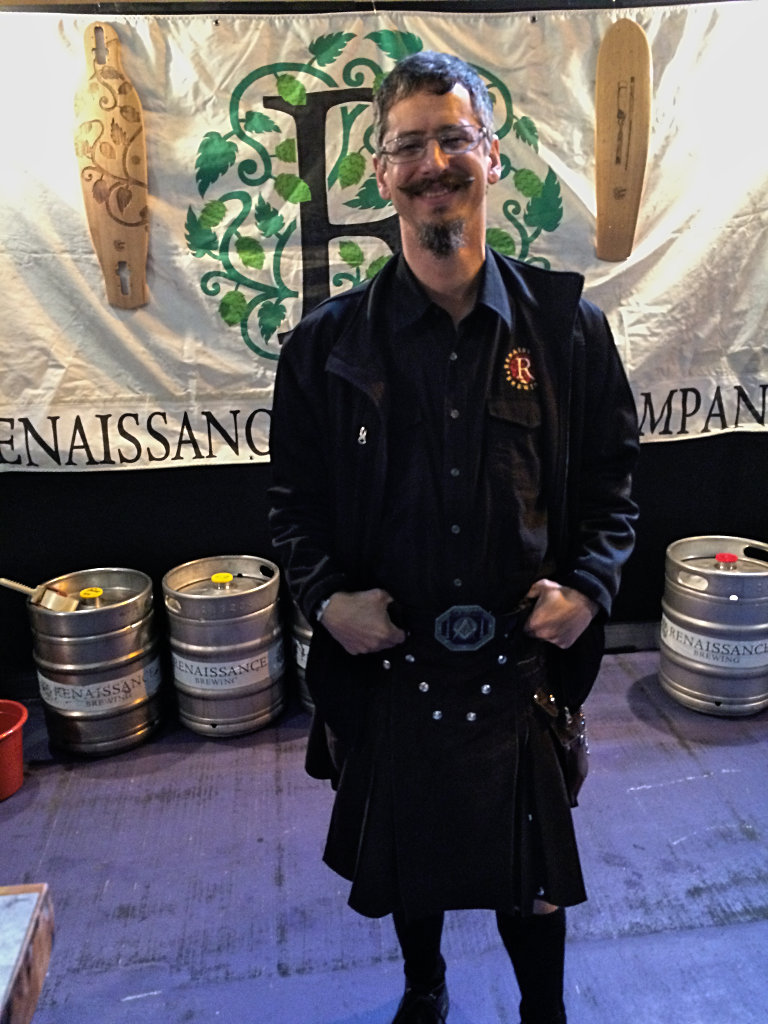 One of the trends evident was “sour beer”, a term that is mostly unknown to the uninitiated. However, in craft beer circles it has skyrocketed in popularity over the last few years. Many have even come to refer to it as “The new IPA”. It’s an umbrella term used to describe a number of beer styles that are fermented, at least in part, with bacteria or wild yeast strains, rather than traditional brewers yeast. This typically gives the beer a “sour” ­(often more complex) flavor profile, making it perhaps more reminiscent of a fine wine than a traditional beer.

If this year’s beer line-up was any indication, it’s safe to say that sour beer has officially made its way to New Zealand, and in a big way. Once a style that was largely unheard of in the country, well over 10% of this year’s brews were sour beers of one sort or another. Warkworth’s 8 Wired Brewing Company’s offering was perhaps one of the festivals most impressive sour beer lineups. As the brewery with New Zealand’s largest barrel program, it’s no surprise that five of their six beers listed at the festival were either classic sours or fermented, at least in part, with brettanomyces (a wild yeast strain commonly used in sour beers). Even the winning beer of this year’s Black Rock Homebrew Competition was a Flanders Red (a well-known Flemish sour beer style). 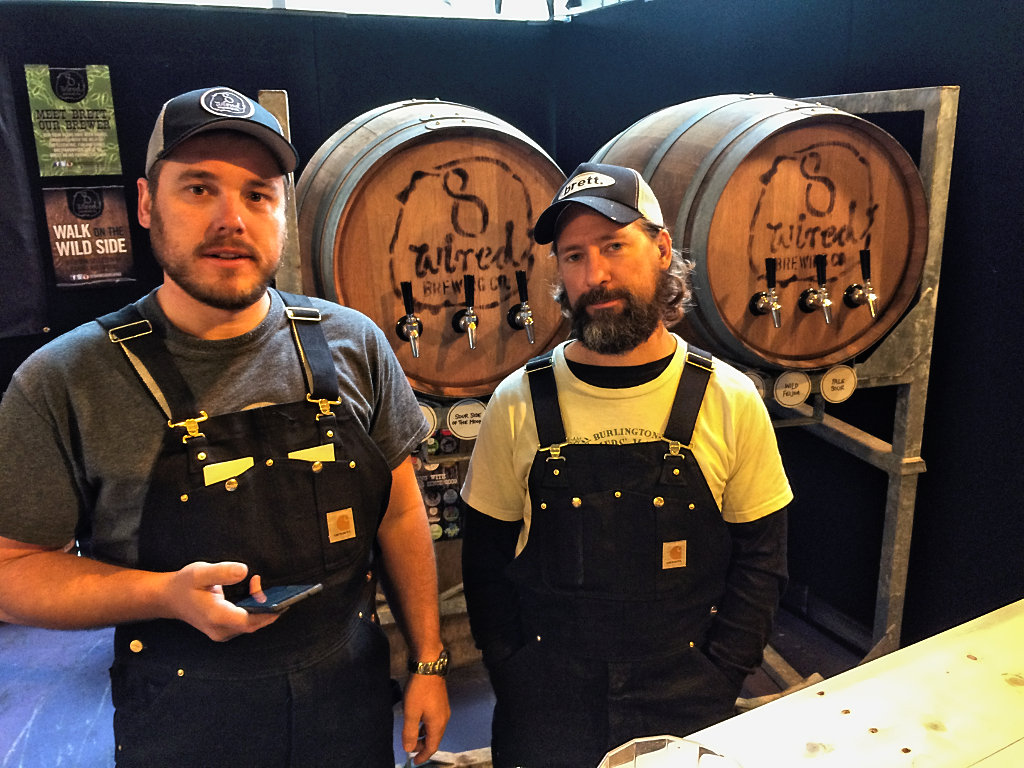 8 Wired Brewing Company was a hit with their many sour and barrel aged beers.

Another notable trend this year was the multitude of chocolaty beers. In fact, three of the festivals top five rated beers either featured chocolate as an ingredient or as a key flavor descriptor. But perhaps the beer that deserved the cocoa crown was Garage Project’s “Sour Cherry Choc Top”. The beer was actually a mix of two completely separate brews. They first poured a sour cherry base beer and then topped it off with a special dark chocolate foam topping. Wow!

And if that didn’t impress the chocolate lover’s in the crowd then their “Cookies and Cream” beer certainly should have. A collaborative effort with Auckland’s “Moustache Milk & Cookie Bar”, the beer is brewed with Belgian yeast, dark caramelized malts, and milk sugars. Then, after the beer is poured, a stencil is laid atop the beer and is playfully dusted with a chocolate and spice moustache. 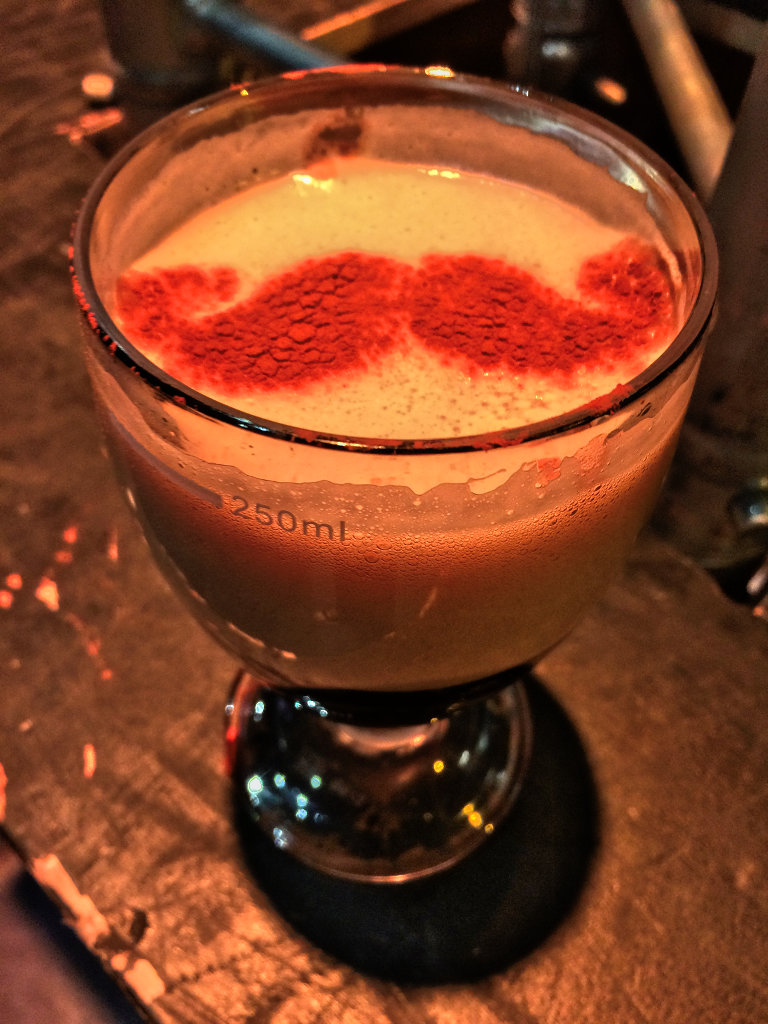 An exclusive Beervana offering: “Cookies and Cream” from Garage Project. 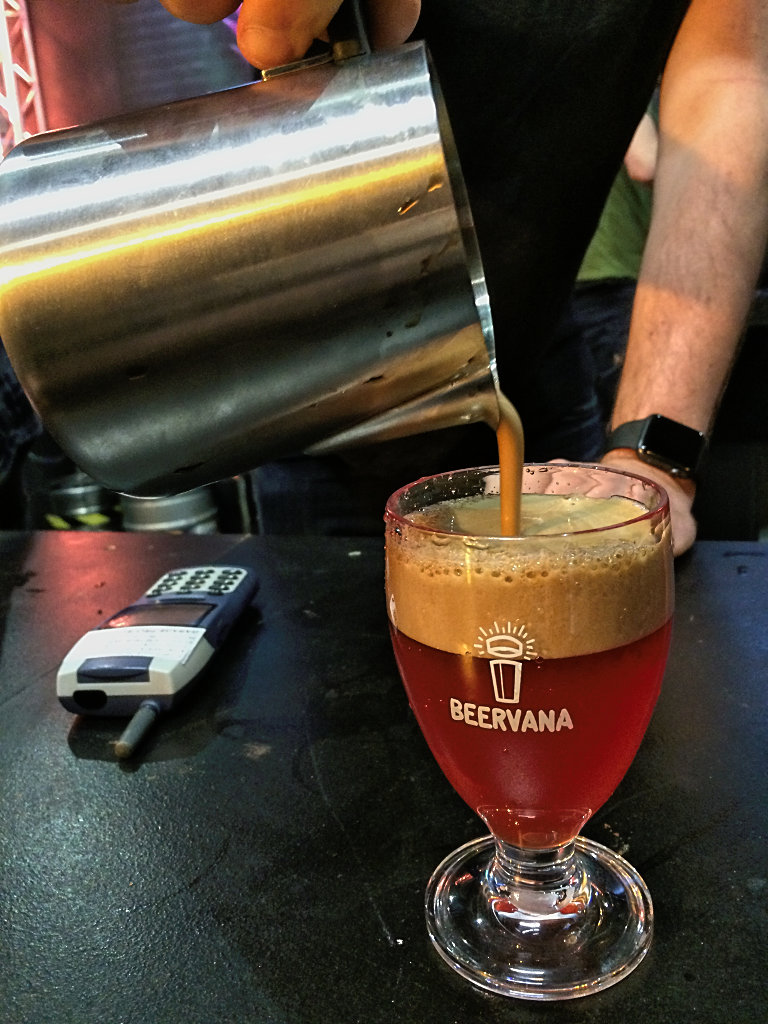 Another noticeable aspect of this year’s festival was food. Not just the food that was served at the festival, but the food that was actually served in the beer. This year’s beers featured ingredients as exotic as blueberries, mushrooms, crayfish, coconut, kumara, caramel, oysters, and truffle, just to name a few. These beers were served alongside food pairings from some of Wellington’s finest eateries.  Showcasing the increasing maturity of the craft beer industry and the demands of the average craft beer drinker.

More and more, beer is something to be paired with a fine meal; to be discussed and analyzed like a good bottle of wine. But unlike wine, the beer canvas is much broader and offers a platform for unlimited experimentation. To read this year’s beer line-up, one might forget for a moment that they were reading a beer list and not the menu of a fine restaurant.

Take the Yeastie Boys “Gunnamatta” for example. The beers description reads “Tea-leafed IPA. Boldly floral nose with stone fruit and citrus flavours and a long dry finish. A unique Earl Grey Blue Flower IPA”. A good example of the melding of non-traditional flavors and ingredients with classic beer styles, a trend that is happening the world over, and clearly one that New Zealand has embraced.

But perhaps the overwhelming feeling that one was left with at the conclusion of the two-day, two-hundred-plus-beer festival (hangover jokes aside) is that beer is now more than just a fizzy, yellow, alcohol delivery system to accompany you as you watch your next Rugby game down at the pub. Beer has become a show in it’s own right. Whether its the exotic ingredients, the colorful descriptions, or the sometimes over the top presentations of the beverage itself, showmanship has clearly become part of the experience.

Many of the brewery booths alone pulled in the crowds. Panhead’s “Custom Canteen” themed booth showcased their new “Can Head” releases while enthralling many and driving home their gear-head brand to all. At the same time the Garage Project booth had a near constant stream of clamoring beer drinkers lined up beneath the gigantic replica of their original ex-petrol station brewery location. Their entire beer lineup was exclusive to the festival, though they stole the show with their “Cabbages and Kings” Imperial Oyster Stout, in which they redefined what it means for a beer to be “smoke infused”. 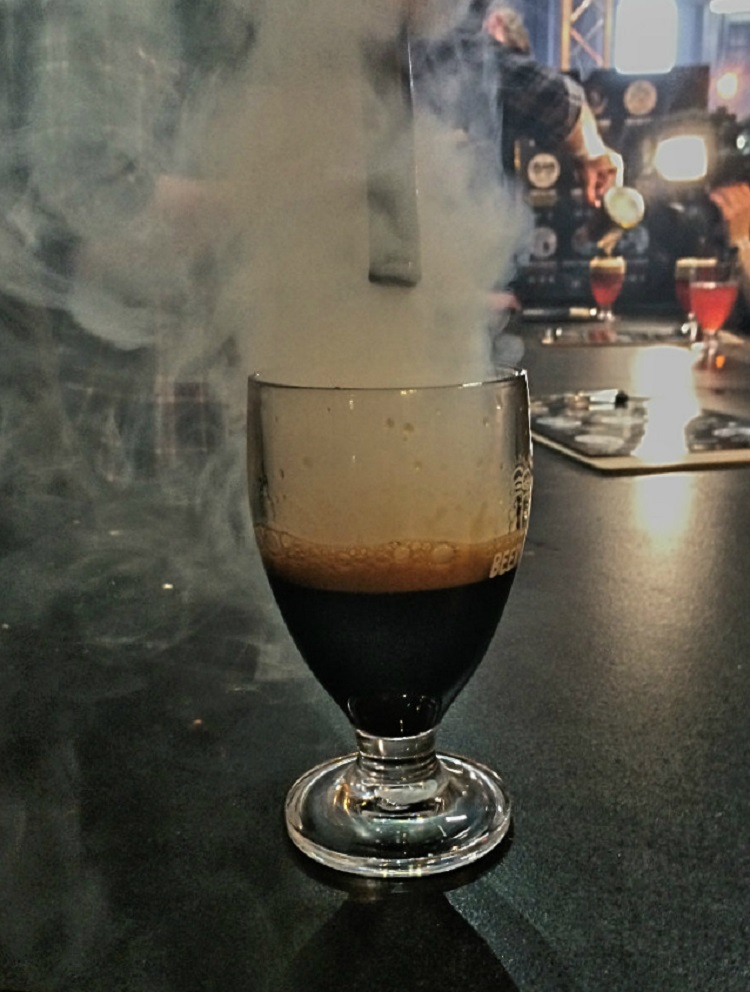 But it’s not just the colorful booths, the over-the-top ingredients, the revival of artisan styles and processes, or even the avant-garde facial hair that underscore this bold and increasingly prevalent showmanship in New Zealand’s craft beer market. It’s the fact that beer drinkers are no longer content to simply order a pint. It would seem that they crave the story behind the beer. Without a doubt, at this year’s Beervana festival, New Zealand brewers delivered.